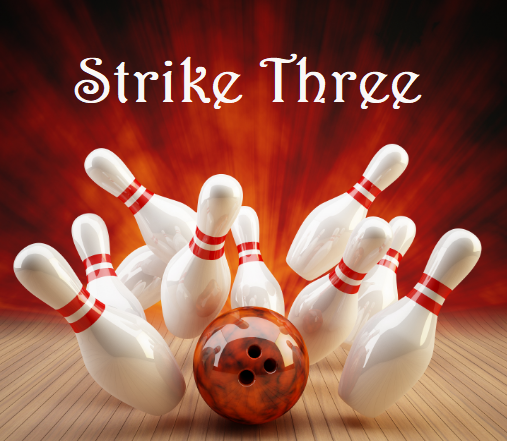 Reggie Jamison pulled his pride and joy, a brand new 1959 Olds, into the parking lot. He strutted like a peacock into the bowling alley, he couldn’t help himself. Tonight, he was going to break old man Crocker’s record by rolling a perfect 300 game for six-weeks in a row. He spotted his team and gave an arm pump in their direction. A few were already rolling warm-up games, while others were still lacing their shoestrings.

“Hey, Reg!” The owner yelled to get his attention above the din.

Reg turned toward his voice. He knew as soon as he saw his face what he was going to say.

“Look Reg, I’m not going to tell you again to stop throwin the damn ball so hard. I had to offer double pay to get a pinsetter for your team. Jonsey is startin a new job tomorrow, and that’s the only reason he agreed to work tonight.”

“How in the hell do they think I stay at the top of my game? Ya gotta a bunch of pansies working here. All they do is bellyache.” Reg shook his head in disbelief. If Al wasn’t so cheap, he’d have automated this bowling alley like most other places.

“Consider yourself warned. One complaint and you’re banned from here. Do I make myself clear?”

Reg threw up his hands in exasperation. “Yeah, I hear you.”  He hurried away to join his teammates. He was too angry to notice that none of them would meet his eye.

“Are we ready to be the 1960 champions, boys?” Reg flicked imaginary lint from his shoe and stood up ready to roll. He had three games—three chances at that record.

“Ready, Captain,” said Shorty Long. He sat at a small table with the scorekeeper from the opposing team. “Doc, you’re up first.”

Reg glanced over Shorty’s shoulder at the lineup. He was fourth and that suited him fine. He hoped Jonsey was ready and not in a bitchy mood tonight. Looking around, he noticed other teams had started.  He closed his eyes and listened to the clack and clatter of pins toppling.  God, he loved this.

He watched Doc dropped nine pins and then pick up the spare on his second roll. As he trotted back, he made the tipping sign for drink. Reg nodded. Nothing hit the spot like a cold bottle of Pabst Blue Ribbon beer.

He expected Dave to roll a strike and he wasn’t disappointed. Shorty was the team’s weak link, but he came through with a spare.

Reg grabbed his ball from the queue and stepped up to the foul line. Hand and eye coordination were important in this game. He leaned forward slightly, his arm moving back with the ball—now thrusting forward, and…stopped abruptly. Dang! Caught that sucker just in time. He repeated his process, but this time the ball left his fingers at a slower velocity than usual. He seemed surprised when all ten pins toppled for a strike. He knew Jonsey was laughing at him when he dropped down to reset the pins and send his ball back.

Reg did his best to relax and slow down his delivery, but with each bottle of beer, his resentment grew. He’d finished game one with an impressive 293 score but had already blown a strike in the ninth frame of game two. He had to roll a perfect 300 in the last game. He waved a cloud of cigarette smoke away and accepted another beer from Shorty. The team had easily outscored their opponent in both games, but Reg was too obsessed with his personal goal to show much enthusiasm.

“Thanks, buddy, I’m sure gonna try.” His ball gleamed from the polishing cloth. Luck was with him thus far. He’d rolled six strikes in a row and hoped this would be number seven. Spectators were starting to gather now, just in case he did break Crocker’s long-standing record.

Strike number seven—applause—number eight—cheers and whistles—number nine—people were closing in to watch. Reg moved like a man about to achieve his biggest dream. Frame ten was before him.

Stepping up to the line, he paused briefly to glance around him. Everybody’s eyes were on him; he could feel it. Carefully, he sent the ball humming down the lane for a strike.  He acknowledged the cheers and impatiently waited for the ball return. Jonsey was taking his own sweet time getting it back to him. He rolled his shoulders, lined up the ball and threw. Strike!

One more ball. And now the crowd was silent. He leaned forward, pulled his arm back, and then sent the ball hurtling forward as hard as he could. The crowd gasped as all ten pins went flying.  His mouth opened wide to congratulate himself when Jonsey fell onto the lane, blood spurting from a huge gash in his head.

Reg sat down and waited for the ambulance to come. Nobody said a word to him, but their eyes spoke volumes. He saw Shorty’s wife hover over Jonsey with a white towel to staunch the bleeding, and breathed a huge sigh of relief when Jonsey sat up.

Reg stood up to face Al who was storming toward him with a thundercloud hanging over his head. Al’s arm jerked up, thumb pointed straight at the exit. Reg left without a backward glance and with ‘Don’t come back’ following him out.

A few weeks later, Reg swore under his breath when yet another of Jonsey’s medical bills landed in his mailbox. He considered tossing them in the trash, but deep down, he knew they were part of his punishment. Because the team hadn’t finished the last game and turned in a score-sheet, his perfect 300 didn’t count—Crocker’s record was intact. He laid his head back against the recliner and closed his eyes. His mother’s voice penetrated his mind. Reg, what have I told you about pride? You never did listen to me.

Leona Pence is a lifelong resident of Illinois. She’s a widowed mother of four, grandmother to twelve, and great-grandmother of four.
Leona began writing late in life after the death of her husband of forty-four
years.
She writes romance because she enjoys a happy ending.
Hemphill Towers is her first novel.
She enjoys reading, writing, and especially being a Mentor at F2K, a seven-week online writing course sponsored by Writer’s Village University.