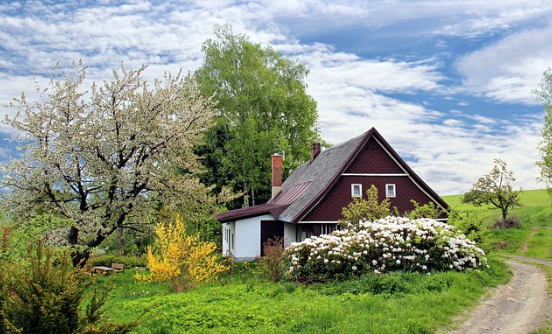 The house was gigantic. The four-story house was the biggest place I had ever see, or at least, the biggest I has ever seen up close.

That might not have been true. Mommy says I “sadurate.” That means you say bigger things then is true.

I had seen big buildings downtown. I had been in the bank and the doctor’s office that had the elevator that had gone up twelve stories, right up to the tip of the clouds, but those places weren’t a place that I stayed in, not overnight, not weeks at a time, or a place where I could explore to my six-year-olds hearts content.

This wasn’t the first time I had been to my aunt’s house. I had been here two years ago, but I barely remembered that. I was a baby then, and not the big girl I am now.

This was Daddy’s sister’s house. Daddy’s was old. She always wore dresses and had her hair done up high on her head. But I liked her and I liked this big house. It was a smelly house on the big, humongous farm. Mommy said it was a two-story house, but I don’t think she knew about the floor that you could get to from the bedroom that I got to sleep in. And I don’t think she knew about the big basement that you could slide down into from that place under the sink where everyone throwed their dirty socks and stuff. Mommy called the laundry shoot. People throwed their dirty stuff down so the cleaning fairy could wash them all up and put them on everyone’s bed again. That was a fun slide, but we had to keep it secret from the adults. My cousin Benny said so.

During the day, when all the grown-ups were out picking up horse poop and pulling on the cow’s dangly things to get milk or driving the big tractor in the giant dirt place, Benny and I would explore all over the big house. Benny lived there so he knew all the good spots. He told me about the fairies. Benny had seen them, and I could trust him ‘cause he was eight and was really smart.

When we went down the slide, we found a big, dark room. But if you went to the other side of the dark room and through the door, there was a was cold room Benny said was a root cellar. In that room, it was sooo cold. Benny said it had to be cold to save the treasure. You know what the treasure was? Cookies and Cakes and all kinds of other things. There was some yucky stuff too, jars of beet and green bean and peas. Benny said those were for the grown-up and we didn’t have to eat them. The jars of all kinds of stuff went all the way up to the top of the wall.

We pretended we were pirates and took some of the yummy things up to the secret floor that was up the ladder in my room. We had to be very careful when we climbed that ladder. It was high and we had to put all our goodies in a pillowcase and tie a rope around it to pull it up. Benny knew how to do that, he knows everything.

When we closed the door to the secret room, it became the floor. I thought that was the most amazing thing I ever saw. When we were going up the ladder, it was the top of the house, but when we got to the top, it became the bottom. I laughed really hard at that and even Benny smiled before shaking his head and calling me silly.

Then Benny said he would show me a secret if I didn’t tell anyone. I wasn’t sure about that, ‘cause I told Daddy everything, but he said he wouldn’t show me unless I did. So, I said, “cross my heart and hopes to die” Then he showed me.

There were fairies. Real, honest to goodness fairies. He had them in his bug jar and he said he caught them outside, at night. Benny is so smart. I don’t know anyone else that could ever catch fairies.

Benny told me the fairies were what made this house so special. They made the slide and the cakes and cookie down in the cold room. He had four bug jars full of fairies. He told me how he first saw them outside and caught them. Then he told me how he had let a whole jarful go and they had made this top room way up above the bedroom. He explained to me how they made the slide that goes down deep to the magic room of cookies. He told me how he catches a new jar of fairies every night in the summer and lets them go in the house so they can do their magic fairy making stuff and fill up the room with all the jellies and candies and cookies we could eat every day. Benny is so clever.

Benny told me all kinds of thing that I would have ever known. He told me why the cows all stood looking the same direction on the hill. It’s ‘cause they’re special hillside cow breed. Their legs get longer on one side so they can stand straight. Benny knows so much ‘bout the world. He’s the smartest boy I know.

I love this place, the farm, and the big house. I asked Daddy if we could live there, but he said “No.” He said he like living there too, but we have to go fly in the plane back to the other side of the planet, to our house.

I think if Daddy knew that this was a magic house and there were fairies and magic slides and a room full of fairy treats, that he would stay. But I can’t tell him. Benny made me promise. Daddy just thinks this is a regular, normal house with a big porch and rocking chairs and cows and goats and chickens. He thinks it smells like country. It doesn’t though. It smells like magic. Benny didn’t have to tell me that. I have that much smarts. I knew that the smells here are different and I know the real, honest to goodness reason. There is magic here. It’s all around and it fills that big house with all the hidden rooms.

It’s the fairies I loved the most. They make everyone happy. Daddy laughs more and he didn’t have to leave for the office. Mommy smiles and takes us to catch tadpoles. I c taught two that I get to take home and see them turn into a frog. I asked Benny how they do that, and he said it was ’cause of the fairy dust that be in the water. I love fairies.

I love magic. I ain’t ever going to forget this place and I’m gonna come live here when I’m old.