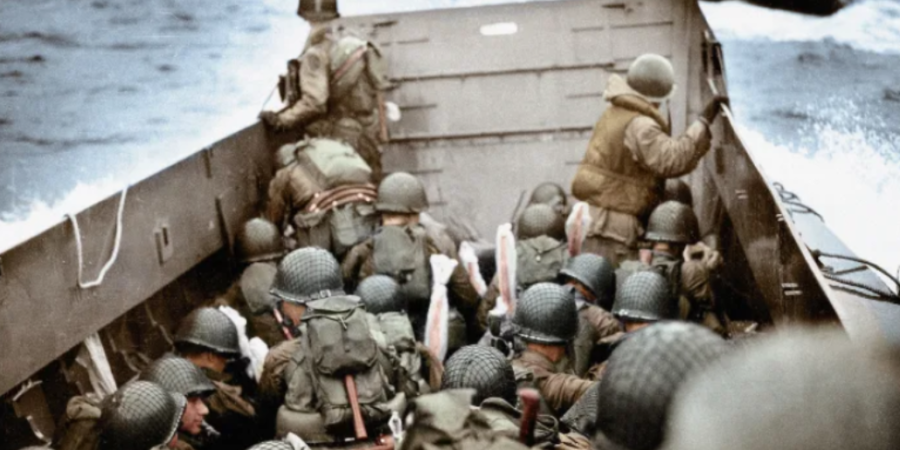 The codename was Operation Neptune, but we know it as D-day.

75 years ago today, June 6, 1944.The massive invasion took years to organize. Hundreds of thousands of men, millions of tons of weapons and equipment were transported across the Atlantic to arrive in advance in Britain for the operation. The invasion force consisted chiefly of Americans, Britons, and Canadians. But troops of the Free French and many other nations also participated.

More than 150,000 brave young soldiers from the United States, the United Kingdom and Canada stormed the beaches of Normandy, France in a daring attempt to turn the tide of the war. It was the largest amphibious invasion in the history of warfare.

Military leaders knew causalities could be high, but it was determined that they must establish a stronghold in France. Hitler had to be stopped. The target 50-mile stretch of the Normandy coast was divided into five sectors: Utah, Gold, Sword, Juno and Omaha.

The men landed under heavy fire from gun emplacements overlooking the beaches, and the shore was mined and covered with barriers and obstacles such as barbed wire, metal tripods, and, wooden stakes made to impede the way and slow the troops. Clearing the beaches was difficult and dangerous. Casualties were heaviest at Omaha, with its high cliffs. Over 2000 confirmed lives were sacrificed on Omaha beach alone. Casualties on Utah beach were the lightest with 197 and 60 men reported missing.

The ground troops were only part of Operation Neptune. Nearly 23,000 aircraft were also part of D-day. They were used as bombers and reconnaissance and they carried over 2,000 paratroopers who face casualties. It’s estimated that 345,000 bullets crossed that area of sky covering 9 squares miles. The chances of survival were foreseen to be one in four. But 50% of the paratroopers survive.

The date and timing of the Normandy invasion had been top secret. They had to maintain radio silence to protect the operation.  During a national radio address on June 5 about the liberation of Rome, President Roosevelt made no mention of Operation Neptune that was already underway as he spoke.

But on June 6th at 6:30am in Normandy, (12:30 am in New York) President Roosevelt addressed the nation again. He felt the need at the time to explain his silence. Moments before he approached the microphone, he was still adding notes to his heartfelt address to his beloved nation.

Here is his historic radio speech.
If you would like to hear this speech in his own words, listen here

“My fellow Americans: Last night, when I spoke with you about the fall of Rome, I knew at that moment that troops of the United States and our allies were crossing the Channel in another and greater operation. It has come to pass with success thus far.

And so, in this poignant hour, I ask you to join with me in prayer:

Almighty God: Our sons, pride of our Nation, this day have set upon a mighty endeavor, a struggle to preserve our Republic, our religion, and our civilization, and to set free a suffering humanity.

Lead them straight and true; give strength to their arms, stoutness to their hearts, steadfastness in their faith.

They will need Thy blessings. Their road will be long and hard. For the enemy is strong. He may hurl back our forces. Success may not come with rushing speed, but we shall return again and again; and we know that by Thy grace, and by the righteousness of our cause, our sons will triumph.

They will be sore tried, by night and by day, without rest-until the victory is won. The darkness will be rent by noise and flame. Men’s souls will be shaken with the violences of war.

Some will never return. Embrace these, Father, and receive them, Thy heroic servants, into Thy kingdom.

And for us at home — fathers, mothers, children, wives, sisters, and brothers of brave men overseas — whose thoughts and prayers are ever with them–help us, Almighty God, to rededicate ourselves in renewed faith in Thee in this hour of great sacrifice.

Many people have urged that I call the Nation into a single day of special prayer. But because the road is long and the desire is great, I ask that our people devote themselves in a continuance of prayer. As we rise to each new day, and again when each day is spent, let words of prayer be on our lips, invoking Thy help to our efforts.

Give us strength, too — strength in our daily tasks, to redouble the contributions we make in the physical and the material support of our armed forces.

And let our hearts be stout, to wait out the long travail, to bear sorrows that may come, to impart our courage unto our sons wheresoever they may be.

With Thy blessing, we shall prevail over the unholy forces of our enemy. Help us to conquer the apostles of greed and racial arrogancies. Lead us to the saving of our country, and with our sister Nations into a world unity that will spell a sure peace a peace invulnerable to the schemings of unworthy men. And a peace that will let all of men live in freedom, reaping the just rewards of their honest toil.

Thy will be done, Almighty God.

It’s been three quarters of a century since that awesomeness day. Many lives were lost, many families lost sons, brothers and fathers.

The world mourned and nations cried.

But many lives we’re saved through the brave actions of these men. Today I want to honor them. I want to say, “thank you” to the families, to the brothers and sister… to the children, the sons and daughters that were left behind and grew up without their fathers.

Thank you for your sacrifice. We honor your loved ones this day.