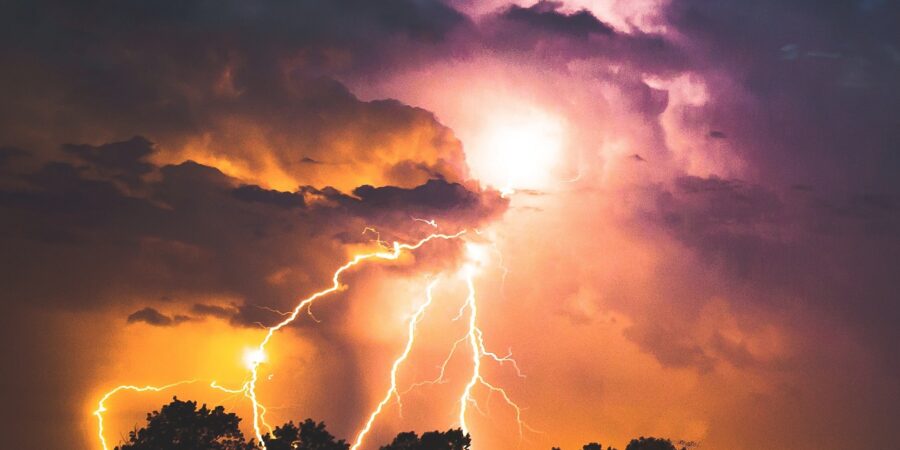 Devotional by Penelope Kaye
Photo by Max LaRochelle on Unsplash

We all have them. Hanging out with a friend. Eating popcorn while watching a movie. Enjoying a good book. Ordinary experiences.

But in our ordinary experiences, we sometimes forget we belong to an extraordinary God. And in the midst of life, our extraordinary God slashes like a lightning bolt in the night, bringing truth to light, and we find ourselves re-defined.

In my walk with God, I have both seen and felt the lightning bolt of God. And believe me—His Truth brought needed light into my life.

This story is very painful and heart breaking, but necessary in order to expose how the enemy of our souls wreaks destruction in our lives.

Since I grew up in an angry home and married an angry man, anger became my tool for managing life. When I made the life-changing commitment to the Lord, some sin habits disappeared, but not anger. It just moved to the back seat instead of the driver’s seat.

I didn’t get angry as often, but when I did, it could be brutal.

Fast forward several years to the day I became a single mom Four and a half months pregnant and caring for a toddler, my emotions ran the gamut—fear, hurt, abandonment. And anger. Lots of anger.

What I didn’t realize is that I unconsciously began believing a lie from satan himself: If you hadn’t gotten pregnant, he wouldn’t have left you. It’s your baby’s fault you’re a single mother.

By the time Rebekah made her way into the world, the lie had taken hold. I was already angry with my precious newborn daughter and didn’t know it.

I prayed with my friends about it, and while that helped, I still felt underlying anger with my youngest. I knew something had to break. Soon.

One day the girls were playing with friends when Rebekah committed some minor infraction. I responded with something to the effect of “Rebekah, don’t do that.” No loud voice, no anger, just a simple correction.

Suddenly, she dropped to my bedroom floor, pulled her knees to her chest, covered her face, and sobbed uncontrollably. I tried to settle her down, but nothing I said made any difference. I had no clue why she over-reacted. I finally left her alone, hoping she would calm down on her own. Did not happen.

Stunned, I stood frozen. Something like a mist dissolved out of my back at the same time a flash of truth slashed through my entire being and exposed the lie I had believed: It was Rebekah’s fault I became a single mother.

With that truth, I became re-defined.

Freed from the lie and the anger, I scooped Rebekah into my arms and rocked her on my bed. I told her how sorry I was, and, more importantly, how wrong I was. I asked her to forgive me, and of course, she did. We hugged each other for a long time before she re-joined her sister and friends.

I wish I could say things changed overnight—they didn’t. However, the lie was laid bare, and the truth set me free to choose not to get angry. Have I arrived? No. But anger no longer rules me.

A lightning bolt of truth from the heart of our extraordinary God re-defined me that day, and I was no longer the mother I used to be.

Perhaps you have believed a lie from the devil himself that’s damaged your relationships. I don’t know what it is, but God does. He wants to set you free and heal your wounded heart. Let His truth expose the lie.

A teacher who loves to write, Penelope Kaye has managed to combine both throughout her life. Whether penning profound poetry, picture books, or adult non-fiction, she pursues excellence in her craft. Her teaching career spans decades in a variety of settings, including writing courses for the local community education center.

The author of an award-winning book, Making Crooked Places Straight, Penelope has written columns for area newspapers and is a highly respected annual reviewer for the High Plains BookFest. Her devotional, “In the Dark and Loving It” won “Best Devotional” for the Oregon Writers Cascade Awards.

While her two adult daughters live on opposite coasts, Penelope Kaye resides in the mountain west. She enjoys walking, doing word puzzles, and eating blueberries anytime of the day.