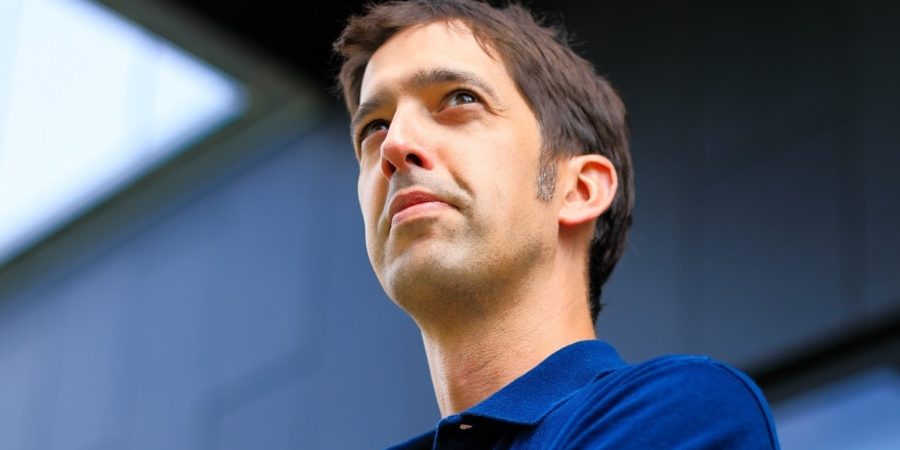 Hi everyone. Thanks for coming back to another amazing interview. Today we have Steve Rzasa with us. Steve has written several books Christian Sci-Fi books and was nominated for a Hugo award in 2015. His debut novel, The Word Reclaimed, was a finalized as American Christian Fiction Writers’ Best Speculative Fiction award in 2010. Thanks for being with us today, Steve. Tell us a little about yourself and how you were raised.

I was born and raised in suburban southern New Jersey, to a civil engineer dad and nurse mom. I grew up in a quiet part of the state, spending a lot of time playing solo, which I think is how I developed an expansive imagination. I didn’t really break out of my shyness shell until late high school and into college, and then pursuing a career in newspaper journalism forced me completely out of said shell. After all, one can’t stay shy when one has to talk to people all day long. That career also helped me become a better writer, because I had to learn how to type quickly and on deadline.

My family was nominally Roman Catholic. I suppose you could say God had his hook in me the whole time, fishing for my soul, because during college is when I found my way to him—or back to him. I’ve been in several Christian denominations throughout my adult life, changing mostly because of geographic relocation, but all have emphasized the primacy of the Gospel and the truth of Scripture.

I now work in a public library in Wyoming, where I’ve lived since 2007 with my wife and our two sons.

Science-fiction is my favorite—always has been. I enjoy stories about deep space exploration or discovery of fantastic worlds. I have a slew of authors I love to read, so I’ll put down a list that is by no means comprehensive or in any particular order—Ben Bova, David Weber, C.J. Cherryh, Timothy Zahn, David Drake, Kerry Nietz, Isaac Asimov, Paul Regnier, Joshua Johnston, Mike Duran, Michael Stackpole, Peter Brett, Nadine Brandes, Jill Williamson, Morgan Busse. If you recognize those as my fellow authors from Enclave Publishing and from Realm Makers, that’s because they’re tremendous writers.

What age did you realize you loved books? When did you start writing?

I’ve always loved books. Can’t remember a time when I didn’t. It didn’t matter whether someone was reading to me or I was plowing through a stack myself. My earliest memory of writing is from third grade when I penned—or perhaps penciled is the better verb—two pages about a pair of spacemen on an adventure. It was based on a spaceship I’d built from LEGOs, which made it much easier to visualize the story! Since then, whether for education or work or pleasure, I’ve been almost constantly writing.

For Us Humans postulates a world that’s 90 percent like the one we know today, with one major change – Earth was visited by aliens about fifteen years ago. Since then, life has proceeded near to normal, except that our world is now part of a vast interstellar confederation. War between human nations is banned. And our species works with a grudging set of alien bosses who aren’t too keen about us getting our hands on their advanced technology.

In this world, we meet Caz Fortel, a man who specializes in going undercover to retrieve stolen art. He’s also grappling with severe challenges to his faith. Caz gets paired with an alien who investigates similar crimes, which rankles Caz for two reasons – he despises the aliens, and the alien in question is exploring Christianity.

How would people react if aliens were real, and some of them were drawn to the Christian faith? That’s one of the questions that drove me to write For Us Humans.

I learned that, by having the alien character pose questions to the doubting human, I could address my own doubts. It also made me ask myself how the arrival of real aliens would affect Christianity as a whole. What I learned was God would still reign, regardless of the situation. I recommend reading C.S. Lewis’ take on the topic, as I mentioned in the beginning of the novel. He wrote a thought-provoking piece called Religion and Rocketry.

I also learned that life’s outcomes are influenced by the decisions we make. Part of For Us Humans deals with the aftermath of decisions Caz and his girlfriend made more than a decade ago; the repercussions impact not only their lives but the outcome of his job.

Do you use an outline when you write, or do you just start with a few ideas?

I used to be what writers refer to as a “pantser” – someone who throws ideas together and writes by the seat of his pants. I haven’t become a full-fledged “plotter,” but I have grown into using outlines with greater detail. Right now, I jot down ideas for a story, usually coming up with the first few pages or chapter pretty early, and then I try to have a chapter by chapter outline. That outline is usually pretty rough, meaning I have maybe a couple of sentences per chapter. I like leaving room for the surprises that crop up when I start writing.

I also try to work up character profiles, to keep their arcs on track, but sometimes things change partway through the story, and new characters often appear, much to my surprise!

I can write pretty much anywhere – waiting in the chair next to my son as he’s getting his braces affixed, at the break room table during my lunch hour at work, at home in front of the computer, on my laptop in the car. So, I don’t have a special location. If I have the right environment, plus music and probably snacks, I can write pretty much anywhere.

If I really had to pick, though, I’d say on one of the comfortable couches at our local library, where I’ve worked as technical services librarian for the past 10 years. There’s something special about creating a story in a place that already is full to the brim of amazing creative worlds.

What was something that surprised youin the way this book unfolded?

I was surprised by the transition in the last quarter or so of the novel to outer space. I fully intended the book to take place entirely on Earth, dealing with a crime committed on a world that’s no longer just the province of humans, but as I moved closer to the climax, I realized I needed to take Caz out of our orbit, so he could see Earth’s new place in the galaxy. It worked out quite well, as it fit with his love of science-fiction and especially Star Trek, which is fond memory he carried forward from childhood.

I would advise new authors to continue writing, whether it’s outlines, flash fiction, short stories, or full novels. Every bit of it is practice. You hone your craft through fingers on the keyboard or pencil on paper. And don’t let doubt get in the way.  Carry a notebook with you wherever you go, big or small, so you always have something in which you can record ideas. Don’t worry if those ideas don’t make a lick of sense at first – there’s always the possibility it will grow into a full-fledged story.

What project are you working on now?

Funny question, because it’s never just one project. I have an urban fantasy trilogy that I’ll release July through September 2019, plus I’ll write and publish a fourth and final of my Vincent Chen space opera novellas sometime prior to then. My superhero novel Airfoil: Origins will also be published this year, as will Strife’s Cost, sequel to my 2016 space opera Empire’s Rift. I also have a story about a man meeting his doppelganger (exact twin) that’s under consideration for publication, as well as lots of ideas that are either in the conceptual stage or ready to be outlined.

Where can we find your books?

For Us Humans and a space opera set called The Face of the Deep are available through Enclave Publishing. The rest of my books are either independently published by myself or through other small presses. You can find all of them on Amazon, and via my website at www.steverzasa.com