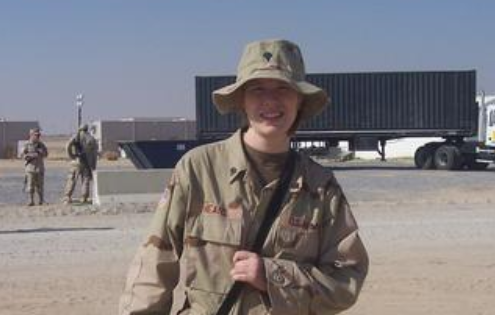 Today is Memorial Day. This is the day we set aside to remember the fallen soldiers that gave their lives to bring us freedom; Men and women that sacrificed all they had so we are able to have it all.
My daughter was a soldier. While she was one of the lucky one who made it home, it wasn’t easy on her and she still fights with the ghosts of that past.
I am proud of my angel girl. She gave a great gift… three tours for her life so you and I can live lives of comfort.

She wrote about her experience in an English class. Here, in her own words, is a small picture of what she went through as a soldier.

One of the places I’ve been that will always be embedded in my mind is Iraq’s Camp Taji. Camp Taji is located between Baghdad and Fallujah. I was stuck in that place for two years and sixteen days starting in the year of 2004. Yes, I counted. I was fresh out of army boot camp and straight out of high school. I remember saying goodbye to my family, making sure that I packed all my gear, and lining up to get on the plane. There were no windows to look out of. We all sat facing each other. When we landed my ears popped and water dripped down the side of my jaw.  The doors swung open and we all filed out single file. I remember that first step into Iraq. The air itself could bring your spirits down. The stench is hard to explain, but it seemed to seep into your nostrils and stay there. The feeling of the sand in the wind stinging my flesh like little needles piercing all over.

It’s hard to get your footing in the sand. You can tell where other soldiers had been walking because the sand was packed so hard, it was like a neglected sidewalk. It was hard not to roll your ankles; the ground was uneven. I was carrying eighty pounds in my rucksack. My weapon in my hand and my helmet and my flak vest was on. I was in full battle rattle.

All I can see is sand. There’s no greenery. There were rows of tents where we were to sleep and set up camp. It was so hot. We prayed for a cool breeze. But when the wind came, it was hotter than the still air and it whirled around us like air from a hot furnace.

We got settled in. The men and women didn’t have separate tents. We were all in the same big green shelters with nothing but rows of cots. I find my cot, put my rucksack and my duffel bag down and change into my PT’s to settle in for the night. Curling up with my rifle as if it was a pillow or a stuffed animal, I finally closed my eyes and fell into a deep sleep, ignoring the heat.

Suddenly a loud boom shook the ground and the alarms started sounding. Jumping out of my cot, I pulled on my helmet and my flak vest, grab my weapon and ran outside to the bunker. Slouching down, I move into a bunker made of cement, covered with sandbags. One by one we stood shoulder to shoulder. There was no room to move or sit down in those four feet tall and five feet wide walls. We couldn’t even stand up.

The sound was muffled. We didn’t know what was going on outside. Not being able to see anything or barely hear, your imagination starts to run with you. The worst scenarios form in my mind. It’s hot and crowded. I felt other people’s breath on me. Bunkers became a common asylum. Sometimes we were stuck in them for hours. I could get so angry that I wanted to burst out and start shooting, but I knew that would get me killed. I try my hardest to keep my head calm and think rationally until the all clear sounded, and it was time for us to get out. My legs were numb, and I could barely walk as we stepped out of the shelter, but I forgot my cramped muscles as I scanned the scene that met my eyes. The mortar hit not far from our tent. I saw the ditch and the scorched earth. I was so thankful It didn’t hit our tent and that I was in the bunker… no matter how terrible it was, I was thankful for that cramped bunker.

I was a mechanic. My job was to fix all the heavy construction equipment. I mostly replaced hoses and change tires. I liked my job. When I was working on a vehicle, my head would clear, and I would forget where I was for a time. From time to time I would go out on convoys, in case a vehicle broke down. I couldn’t tell you the number of different camps I’ve been too. Quite a few, but always the same view. Nothing but sand.

I remember Christmas. My mom sent me a box with some Skyline Chili and a little Christmas tree. You see, I am from Cincinnati and Skyline Chili is the best!  Everybody in Cincinnati eats it. It’s kind of a tradition. I was so happy to see that can of Skyline. It was a little piece of home. She sent me a hotplate to cook it on. I sat in my room cooking my chili and setting up my Christmas tree as I hummed Christmas songs. To this day I don’t think she understands how grateful I was. Just that small slice of home meant the world to me.

One night I fell asleep before suddenly jolting awake. I had another nightmare. Somebody had stabbed me in my back. When I woke up the pain was still there. I had to pull guard duty that morning, so I did my duty. The pain got worse. I could hardly walk as I performed my walkthroughs. It got to the point where I could barely stand. But I finished my shift, then I headed to the medic tent. They pumped me full of IVs and ran some tests. It was my kidneys. They were trying to shut down on me. I was in the medical tent for about two weeks before anyone even notice I was gone. The Sergeant showed up giving me a get-well card and announced they thought I had gone AWAL. All I could think was: “What if I was actually lying hurt somewhere no one was even looking for me?” I can’t depend on my unit and the people that I went to Iraq with. I felt so alone in the war. Nobody had my back. That’s the scariest feeling in the world. How could they not go looking for me? I’m a soldier. I did my duty. I did what I was told to do. Did I blend in so well that they didn’t notice me or did they just not care? All this was running through my mind. Then I looked at the TV and the Bangles were playing. They actually had a TV, and my hometown team was on it. The Cincinnati Bangles won that game. Miracles do happen. It’s those moments. Those little moments that get you through day by day.

I was released from the medic tent and more time passed. I was pulling guard duty in the tower on the main gate.  It was night and it was dark. It wasn’t hot. The night was cooler. I had my night vision goggles on. I scanned out across the way next to the road. There was a white van, and somebody got out and started a fire. I called it in, and I reported I couldn’t see the surrounding area. The fire and night vision goggles don’t go too well together. I suggested we should go check it out, but the commander said, “No. You have to remember there are friendlies out there.” I wanted to insist. I should have insisted. He was such an idiot not to call troops out just to check it out. Come to find out, the person I saw was digging a ditch for an IED. Our soldiers rolled out the gate the next morning to pull patrol and the IED went off. I should have insisted. But I’m a soldier and I don’t ask questions, I just do what I’m told.

War does funny thing to your mind. One night another soldier and I were on guard duty. We were chatting. He was telling me about his training and what a badass he was. Then we heard shots. He crawled into a corner and curls up into a little ball. I took my rifle and I start firing while yelling. “Call it in Milton… call it in!” He just stayed curled up in his ball. I had to call it in myself. I laugh at this now but at the time I was scared. Nobody had my back.

Finally, it was my time to go home. I packed my gear I definitely wasn’t going to miss this place. I wanted to get clean. Showers meant nothing here. The second you stepped out you were full of sand dust all over again as if you never took a shower at all. I couldn’t wait to be clean. I grabbed my gear and climbed into the plane. It was a long flight. but I was so grateful. As I stepped off the plain, wanted to kiss the ground.

I was finally back home.