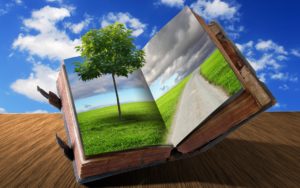 “She’s barely talked all day. Just look at her.”

“If you can call that eating. She’s done more moving food around her plate, than anything else.”

“She’ll snap out of it. She’s just a child. What’d you expect? You’re not handlin’ this well yourself, you know. When was the last time you ate?”

“Leave me out of this, Norma. My little Rose has had it hard. Real hard. Lost two mothers now.”

“She was a trouper today. Never expected her to throw that handful o’ dirt in the grave like she did.”

Harold let his mug of coffee fall onto the counter causing Norma to jump. Her eyes widened as he left the spilled mess and headed for the door onto the porch.

Norma followed her brother into the warm spring night. She found him slumped over, crying on the steps. She hadn’t seen him like this before. He was always the one who was in control. The strong one.

A breeze was blowing and Norma could hear the sound of the ripened wheat whipping in the field beyond the farm house.  Anger began to well within her. How could Martha have done such a selfish thing? What had possessed that woman to take her own life?

Norma never had felt close to Martha. Ha! That woman always was a bit strange. Her nose in everyone else’s business, and such a sharp tongue; especially toward the twins, but Amanda Rose received the brunt of it. Norma couldn’t figure that one out. Amanda Rose had been such a quiet, scared bit of a thing, not at all like her spunky sister, when Harold had found them in that field. He was a saint to take the orphans in. Martha never had seemed to want her around, nor had she wanted Harold’s two older boys, for that matter.

“What am I gonna do with them, Norma?” Harold’s question pulled Norma out of her own thoughts and back to the present.

“What do you mean ‘do with them’? You’re not plannin’ on sendin’ them away or nothin’ crazy like that. Are you?”

“‘Course not! That’s not what I’m talking about. But, look at Rose there.” Harold motioned toward the small child still sitting at the table.

Norma never did understand why he called young Amanda by her middle name. Both girls had the same middle name. Rose. Why was that? It was understandable why Miranda was nicknamed Randee. Wouldn’t Mandy be a better nickname for Amanda? It was cute for twins too… Mandy and Randee… but Harold never did do cute well.

“She just sits. Can’t even give her a good wash. Can’t get her near the tub where Martha…. she found her ya know…” Harold’s shaky voice broke through her thoughts.

“No…I… I couldn’t… I didn’t want her to have to go through that… The cops and all… they’d want to ask her questions…and… it was hard enough for me. She’s just too young… She’s gone through too much already.”

“What about the boys? How are they handling it?”

“They’re fine…but…well… ya know they haven’t been close in years. They weren’t her boys and she let them know. ‘Specially as they got older.”

“Why did you ever marry that wo… Oh! H..Harold! I’m sorry! I’m sooo sorry! I wasn’t thinking. I shouldn’t have never said that!”

“I understand, Norma. But she wasn’t always like that. Remember how she used to love on the boys? At first there, I thought she might be hitching up to me for Nate. Ha! Tad was a handful, but she loved his antics.” A single chuckle escaped him before Harold drifted into silence. Memories of better days filled his mind.

“What happened to her, Harold? Do ya know?”

“Harold! Whatever do you mean?”

“We couldn’t have kids. That’s what happened. It’s what she wanted more than anything. Then, when I found little Rose and Randee, she…well…she just didn’t think it was… she thought I…that they was….”

“Did she think you were havin’ an affair?”

“I tried to convince her I wasn’t… that I never would. But Norma…. look at Rose there. Look at her. Who does she look like?”

Norma stood up from the porch step, where she had been sitting next to her brother and walked over to the glass storm door. Splinters of old paint broke off and stuck to her knit sweater as she leaned against the door frame and peered into the kitchen.

Rose still sat in the same spot, fork still in her hand, half way to her mouth, food still on her plate. Norma could tell that the little one was fighting sleep. She should be up in bed with her sister.

“It’s high time that youngin’ was in bed.”

Norma walked up to her quietly, not wanting to startle her. She needn’t have worried. The child gave no indication that she knew anyone else was in the room. Norma took the fork, but the child’s little hand stayed curled as if she still gripped it.

Tears welled in Norma’s eyes and ran freely down her face as she gathered the child into her arms. Rose’s head lay on Norma’s shoulder. Her stiffness, a reminder that any trust that had once been there, was now gone. What a blessing it would be to have a child. How could anyone throw them away? How could a mother leave them in a field for someone else to find? But mostly, how could one entrusted with such a life, be so selfish, as to take her own life and leave this broken mess behind?

Norma thought briefly of taking her in the bathroom to wash up before putting her down for the night. But the hysterical scene that she had witnessed before the funeral that afternoon convinced her otherwise. They could deal with that in the morning. Right now, this child needed sleep and she and Harold needed to talk. Plans had to be made. Harold was right. They needed to decide just what to do with his little ones. It was obvious Rose shouldn’t live here.

Rose was already asleep by the time Norma got her up to her room on the second floor. Deciding she didn’t want to wake her, she laid her on the double bed next to her sister’s bed, dress and all. Moonlight shone through the window casting its golden light and caressed the sleeping girl’s dark-brown-curls. What angels. Her childish innocence was even more evident in sleep.

Spinning around Norma almost missed the door and ran into the wall in her hurry to get back down the stairs. There were too many questions in her mind now. Was this what her brother was trying to tell her? Were the twins really his children? Did he… could he… could her brother have cheated on his wife? Maybe Martha had reason for being so ill mannered.

“Is she yours?” Norma blurted out as she entered the kitchen.

Harold had come in from the night air and was now sitting at the table with a fresh cup of coffee. Norma didn’t give him a chance to answer before she continued.

“Is that why Martha killed herself… cuz you had an affair? Then brought your youngin’ into her house?”

“That’s what you think of me? You think I could do that?” The pain was evident in his voice, but she wouldn’t have needed to hear him speak to know she had hurt him. His large frame sunk back into the chair.

“What am I supposta think? She looks exactly like you. ‘Cept for the curls, which makes her look more like…”

“Lilith,” they both said at the same time.

“Oh my Go… it’s been…but..if….but… why would that upset Martha? I would think she’d wanna help out your twin sister. Twins really must run in families, hmm…?”

“Martha never knew. I never told her ‘bout Lilith. Maybe I made the wrong choice, but I was trying to protect Rose and Randee… and Lilith. In the end, maybe I was the one who killed Martha, with my silence.”

“No! It was Martha’s choice. She did have that depression.” Norma countered, trying to ease his pain and guilt “so…  Randee and Rose are Lilith’s children? Our real nieces? What happened there?”

“See this here letter? Lilith wrote it and left it in the field next to Miranda, she was chewing on it when I found them”.  A slight smile creased his lips. “Lilith had to save them from that scumbag of a man she married. He tried to sell them…  to pay for his drugs. So Lilith left them for me to find. Thought she could get away too, but… it’s all in here for the girls to read themselves when they’re older and ready.”

“You did a good thing takin’ her in, and you can’t be blamin’ yourself for Martha. What you need to do is think about… what Rose needs now. She goes crazy every time she goes near that bathroom.”

“I been thinking ‘bout that. I’ve got that rental, not as nice as this place, but it’ll work. We can rent this one out instead. I may need to ask you to take her for a few days while I get moved. I think Randee will be fine here. She’s taking things better.”

“Not on your life, Norma. That little Rose is mine.”