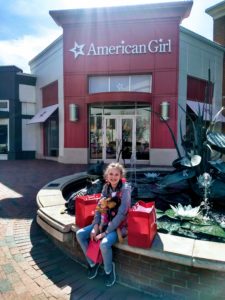 Those of you that follow me on Facebook and Twitter know I took my granddaughter to the American Girl store for her eleventh birthday. This was a huge deal for her and one she has been anxiously awaiting since she was six years old. But was it worth all the hoopla and expense just for a trip to a high-priced doll store? I can’t answer that for everyone, but I’ll tell you a bit about my experience and let you make up your own mind.

Let me begin by telling you that this isn’t my first trip to American Girl Doll store. It’s been a tradition to take my nieces and now my granddaughter to this store for their eleventh birthday. It’s been a special and looked forward trip for each one. I have deeply enjoyed the time with each one. It’s time that can’t be replaced or forgotten. I feel this alone makes it more than worth it. We don’t have a store close to us, so a trip like this takes time, money, and a lot of planning.

With my nieces, we took a plane to Mall of America. It was a one day trip where we also spent time at the amusement park that is built in the middle of the mall. That place is amazing and if you ever get a chance to go, it’s definitely worth a trip or even a side trip. I don’t work for the airline anymore, so paying for a flight there was out of my price range. But luckily, there are several smaller stores all over the U.S. and one of those was only about two and a half hours away. We could have made it a one-day event. After all, with the time it takes to drive to the airport, get through security, wait for the flight and then the flight itself, it took about three hours to get to Minneapolis. Flying on a plane for the first time was a big deal and my granddaughter was disappointed when I told her we wouldn’t be going on a plane, so I wanted to make this trip a bit more special.

I decided to book a hotel room and go up for two days. Two days in one store, you ask? Oh yes, and there was plenty to do.

My hubby picked my granddaughter up and we all grabbed a bite to eat before us girls hit the road around one o’clock. We were headed to a tea party at 4:30. We arrived thirty minutes early, which was just perfect when going to a city where you have never been and having to find the store and hunt for parking. This gave us about fifteen minutes to look around before heading to the Bristo for the party. The place was packed with Mother/Grandmother-daughter pairs. Each girl was greeted as if she were the most important part of that night; which they were. The dolls that each girl was carrying was also greeted and ask how they were. The delight on each little face was worth a thousand words. 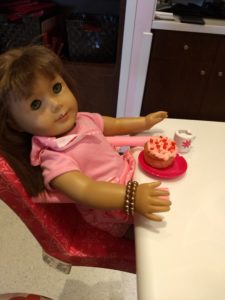 Each doll was given a highchair and a little cup and plate. These the girls got to take home at the end of the party. I was informed when I called to make reservations that this was a tea party and not a full meal, but there was plenty of food. There was a delicious variety of small sandwiches, tea, hot chocolate or coffee, and then dessert or decorate-yourself cupcakes. There was even a small cupcake to decorate for your doll. This whole party was under thirteen dollars a piece. Maybe a little pricey for something you do every week, but worth it for a special occasion. We spend about the same price going to the movies. 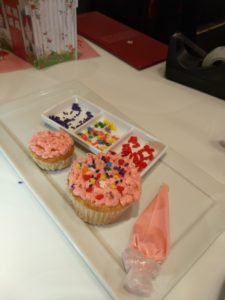 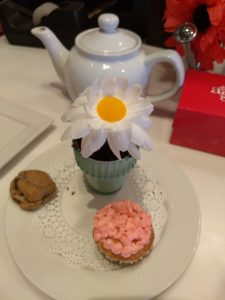 The next day was also amazing. We went early. My granddaughter had been saving all her birthday, Christmas, and chore money for over a year and had $110 to spend. She had so much fun picking out just the right outfits and accessories that she wanted. I truly feel she had more fun doing this than any other part of the trip. I believe the fact that this was her money that she could spend just heightened the experience. 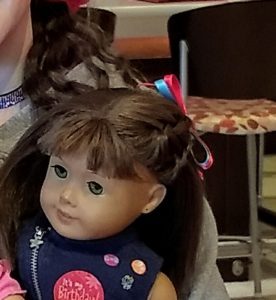 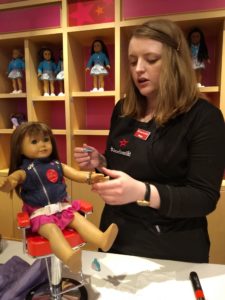 Then it was time for the hair appointment… for the doll. Yes, that’s right, the doll went to the beauty shop. Her hair was trimmed, (evened out from the terrible job little brother did) then braided in an adorable waterfall braid, and nails painted. 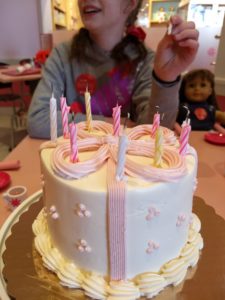 Now that her doll was beautiful, we went to a late lunch at the Bristo. The same care was given to the girls and their dolls at the meal. I saw then why they said the tea party was not a full meal. Their portions are huge! It started out with appetizers. This could have been a meal in itself. Then came the meal. I had one of the best grilled-chicken sandwiches I’ve ever eaten and my granddaughter chose a chicken caesar salad that was way more than she could eat. Both of us asked for doggy bags. But that wasn’t all. We still had her birthday cake to go. This two-layer cake was decorated with white whipped icing and pink icing bows. We each had a piece served with ice cream. The remainder of the cake was packed up and we took it home. The price for this whole meal was about what we pay for two adult entrees at a mid-priced restaurant like O’Charey’s or Olive Garden.

So, was it worth it? I would say that’s a definite yes!  This was a weekend she will never forget. This memory will always be hers when she has grandchildren of her own. It’s time spent together that I will always treasure. And the price? Under $200 for the hotel, gas, and food. I would have spent the same amount if I had thrown a party and bought a present. Well, maybe not, but close.

Oh, one last thing. I mentioned at the beginning that my granddaughter was eleven. You may be thinking that this trip may have been better for a younger child. I disagree. I chose to take my girls at this age for a couple reasons.

Making memories and spending the whole time focused on the child will always be worth it.